Blowing with compressed air can cause hearing damage and tinnitus

Home / Blowing with compressed air can cause hearing damage and tinnitus

A version of this article was first published on silvent.com

Tinnitus can be described as sounds in the ear that surrounding persons cannot hear. It can be different sounds, depending on the person, but most commonly it is a high-frequency sound. But it may also involve a howling, whistling or humming sound. 10 - 15% of the world’s population have tinnitus.

Why do people develop tinnitus?

Hearing damage is the most common cause of tinnitus. But why hearing damage results in tinnitus is still not clear. Researchers believe that it involves the tiny hair cells that line the cochlea. The researchers’ first theory is that the damaged hair cells send faulty signals to the brain. The second theory is that the hair cells are extra sensitive to the movement of fluid in the cochlea. More research is needed to be able to explain exactly how tinnitus develops.

Tinnitus most often occurs in conjunction with elevated noise levels. This type of hearing damage can develop after one or more instances of high noise levels. Tinnitus can also develop due to other causes, for example, illness, hearing impairment or injury.

How does tinnitus affect people who suffer from it?

Tinnitus is not dangerous, but it can often be uncomfortable and lead to health problems, for example, difficulty concentrating, irritation and problems sleeping.

Can tinnitus be cured?

There is no medication available to treat tinnitus, but there are treatments and aids available that can lessen the discomfort for those affected. There is no cure for tinnitus, and there is no operation to fix the problem, but it can be prevented. By using proper safety equipment at work, the risk of being affected by tinnitus or suffering impaired hearing can be reduced. We will help you minimise the risks of blowing with compressed air. 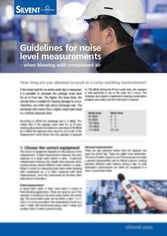